It’s like Kanye’s plan, but with a lot less crop tops and a lot more word count.

Like I mentioned in last week’s post — I haven’t been writing much lately. I’ve gotten out a few short stories that I feel good about, but what I REALLY need to be doing is editing the 2nd draft of my book. I’ve puttered away at it, but haven’t succeeded at getting down to business.

I know I work better with structure. I need deadlines. But sometimes creating those for yourself… the motivation, it’s lacking.

Last week my friend Jay introduced me to a site called Pacemaker. In a nutshell: you put in your writing goals and deadlines, and Pacemaker spits out a plan. The exact number of words per day you need to write (or edit) in order to hit your goal.

So I thought… what would it look like if I made a goal to finish the 2nd draft by the end of this year?

And you know, it’s not too shabby. 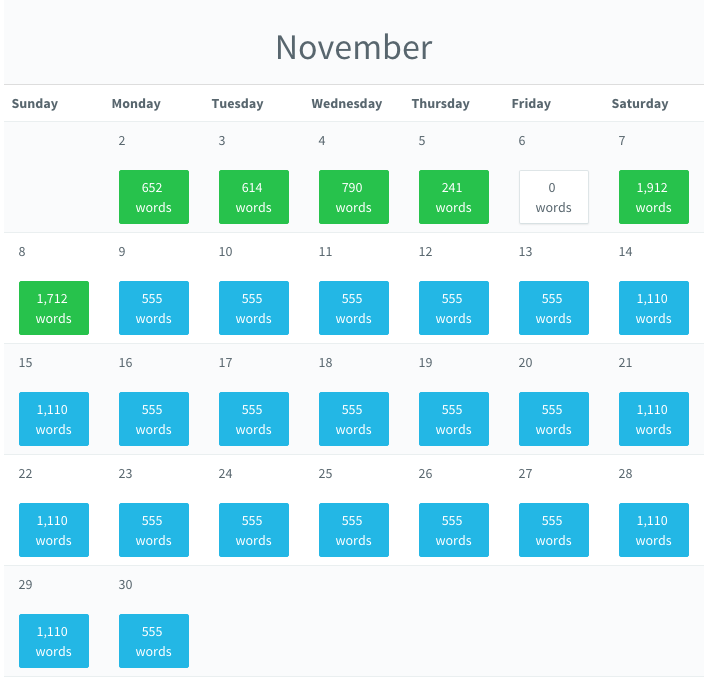 About 550 words on the weekdays. A little over 1,000 on the weekends. December looks the same. Totally doable. And I’m doing it.

As you can see, I’ve already missed one day–but that’s ok. Not beating myself up over it. I made it up on the weekend, so we’re still on track.

Breaking it down day by day, word by word, makes the goal look much more reasonable. More attainable. 550 words a day doesn’t seem scary. (On a good day, I can get that done in the morning before leaving for work.) The vision of having that 2nd draft printed up and piled up on my desk — it’s taking shape.

You just have to start. One word at a time.